Blast from the Past: The Hydragen 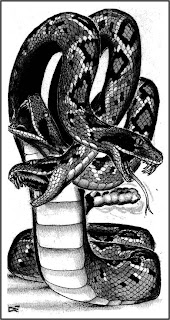 The Hydragen is a huge, mutated descendant of the diamond-backed rattlesnake. It is found in many places in the deserts of southwest North American (the old United States and Mexico). Hydragens range from 50’-65’ in length in adulthood and appear to be large, multiple-headed serpents; 2-7 heads are present and each is well equipped with razor-sharp fangs and teeth. The six major fangs, in the upper jaws along the front, contain class 11 poison effective only against mammalian creatures (including humans, of course). Because of their speed, these monsters rarely go hungry, although relatively intelligent beings give them a wide berth. They are not especially intelligent themselves, but Hydragens readily pursue any prey and use their cunning to drive victims into dead-ends (box canyons and the like) to prevent escape.

If the creature is in grave danger or confronted by many opponents, a special power of the Hydragen can be brought into play. The creature can generate large amounts of highly explosive gases in its stomach, and once every 12 combat rounds it can belch out clouds of this gas from all of its heads, directed at as many different targets (within range) as it has heads.

Each head then uses the Hydragen’s pyrokinesis ability to ignite the gas clouds, at ranges between 30’-100’ as desired, creating an explosion with a 20’ radius of effect. The flames and concussion from the blast will do 10d6 damage to all within the blast area, , and beings of man-size or smaller out to 35’ from the blast center stand a 75% chance of being knocked down and suffering 1d6 damage.

A Hydragen may generate this gas only three times a day. If this fails to stop an opponent after the third use, the Hydragen will retreat. Those beings caught in the blast areas may take half damage (5d6) if they are immune to either fire or sonics, or no damage if immune to both. Note that even if the victim is immune to these effects, the 75% chance of being knocked down for 1d6 damage still applies.

Hydragens prefer living in isolated locations like deserts and barren, rough terrain. The brilliant patterns of yellow, red, and black across the Hydragen.s back stand out clearly in any terrain or environment, though this is not yet a major problem for it, since its speed and tenacity make up for its lack of camouflage.

A Hydragen nest is a shallow depression in sandy soil about 20’ across and 6’ deep. There is a 20% chance of 1-6 eggs being buried 3’ below ground. Each egg is 15” long, ovoid in shape, and dull yellow in color. It is very possible that more than one adult Hydragen inhabits the nest or the area nerby. There is also a good chance (65%) that 1-6 treasures and 1-2 artifacts will be in or near the nest, previously appropriated from some unfortunate adventurers who ventured too close.

Each head of a Hydragen has its own brain, and the heads work together with exacting coordination. Among other advantages, this accounts for the creature’s immunity to illusions and illusional attacks or forces. The lifespan of a monster of this sort is estimated to be over 200 years.

Blast from the Past

Just giving everyone a collective "heads-up" of another blog topic I am starting up - "Blast from the Past."  This thread will be converting Gamma World Monsters from early Dragon magazine's to Mutant Future stats.  There is no intent to duplicate (or compete with) the great work Carl has been doing at his blog, Warning - Mutagenic Substance.  Carl is doing a great job of converting second edition Gamma World monsters appearing in the rulebook for use in Mutant Future.  Look for the first "Blast from the Past" posting later this evening, featuring the Hydragen!
Posted by The Angry Man at 7:57 PM No comments:


Prowling through blasted ruins or sylvan plains with equal adeptness, the Slyeena’s are hunters without peer.  Organized into clans reaching upwards of 30-60 members, the smaller number of Slyeenas usually encountered are a hunting party gathering food for the cubs and their adult guards back at the main den.  This den area could be in caverns, ruins, or pits dug out in the plains.
Full-grown adults stand 3’ at the shoulder, 5’ in length, and weigh in between 100-120 pounds.  Some clan members can be close to 4’ at the shoulder, 6 ½’ in length, and tip the scales at 200 pounds.  Their coloration appears to be light beige with markings varying by individual.  However, is their neutral state when their mutation, Chameleon Epidermis, is not active.  When hunting, fighting, or scared, their mutation makes them virtually disappear into their surroundings, making them hazy blurs when getting into melee range.  This has earned them the nickname Srea Ark (“Invisible Dog”).  Chameleon Epidermis grants Slyeenas at +2 AC bonus in melee, and a +4 AC bonus in ranged combat.
Slyeenas hunt using their mutations and pack tactics with frightening effect, ambushing their prey from numerous directions while masked by their Chameleon Epidermis.  Using powerful bone-crushing jaws to attack intruders or take down prey, the Slyeena is extremely resistant to disease and toxins, enabling them to consume a wide range of foods.  The multi-axis attack closely mimics Combat Empathy, granting each hunting pack member at +1 “to hit” and an additional +1 damage per die, up to a maximum of a +3 damage bonus per die (8-14 damage/attack) with three or more pack members.
Mutations:  Chameleon Epidermis, Combat Empathy (modified)
Posted by The Angry Man at 12:04 AM No comments:

Mutant Monster Mondays (M3) are where the Mutant Future monster postings will be kept on the Angry Man's Game Blog.  For anyone who wishes to contribute to the growing corpus of Mutant Future web-based content, but does not have the time or inclination to maintain a blog of their own, I would be happy to post your creations here.  Hopefully it goes without saying that the person submitting it will be given credit for his (or her) original creation.  Feel free to e-mail me at 'the dot angry dot man at gmail dot com'.
Posted by The Angry Man at 11:55 PM No comments:

Goblinoid Games' Mutant Future hooked me the minute I read the pdf...and then drove me to print it off so I could have my own copy to scribble on!  The game brought me back to the days spent with friends playing first and second edition Gamma World.  We spent countless hours rolling-up characters, exploring ancient ruins, and fighting machine-gun toting militant rabbits!

What really inspired me to start this blog was seeing all the other active Mutant Future (and other) gaming blogs whose author's have decided to share their boundless creativity with the rest of us.  Please bear with me as I get my house in order, and I look forward to reading any and all comments you good readers decide to make.
Posted by The Angry Man at 11:43 PM 2 comments:

Looking to the Future...The Mutant Future.

The Angry Man
Just another gamer who has grown-up, gotten married, had children and pines for a good "Old Skewl" RPG.